How do Barcelona, Real Madrid and Atlético Madrid perform in the Liga BBVA 2015/2016 if we consider the quality of the opponents they have faced up to now? We can look at the below graph:

Graph 1 – Performance in the Liga 2015/16 according to opponent quality for Barcelona, Real Madrid and Atletico Madrid.

The graph is self explanatory… Barcelona’s performance against the top teams is much better than their main title rivals, Real Madrid and Atlético Madrid, hence their relatively large points gap in the ranking.

Often statistics are not successful in giving insights about some particular footballing abilities. Sometimes they are pretty straightforward and sometimes they need a strong context, in order not to be misleading. One particular aspect not so easy to put in statistical terms is a player’s playmaking ability and vision, an ability in which Barcelona’s Lionel Messi is particularly ‘gifted’. Here I try to give some statistical insights on how good his vision is and how it compares to other players.

Based on all the stats currently provided in football, those who give information about playmaking ability use ‘chances created’ as the parameter. For a player’s vision, the parameter used is ‘through balls’. Through balls are defined as “an attempted/accurate pass between opposition players in their defensive line to find an onrushing teammate (running through on goal)” [example image 1]. Hence, a combination of chances created and through balls enables us to judge a players’ ‘vision’ and his ability to create chances for his teammates.

Note that the total number of chances created is not necessarily a measure of their playmaking or vision skills, since many chances can be created by a ‘simple’ pass exchanged between players and also by corners, free kick passes, etc.

Charts 1 and 2 give the total and through ball chances created in the Liga and in the Champions League since the 2009/2010 season. Messi tops both charts but yet this doesn’t give justice to his incredible vision, which we have been witnessing regularly for years now. A fairer impression is achieved when looking at the number of chances created by through balls, in which Messi is simply far beyond the rest.

Aside from being a measure of a player’s vision and ability to break defensive lines, through balls are also an indicator of creating more valuable chances for your teammates. This can be inferred also from looking at chart 3. Here we can see that Messi’s chances created by through balls have a conversion rate almost twice as high as any other type of chances, meaning they are easier to be converted into goals.

To give some further insights on how good Messi’s (and also other players’) vision is and take into account that various players have played different number of minutes in different competitions, I made 5 charts. These charts show the relationship between total chances created and chances created by through balls in the Liga (Charts 4, 5 and 6) and in the Champions League (Charts 7 and 8), both in absolute numbers and in numbers converted per 90 minutes of play. 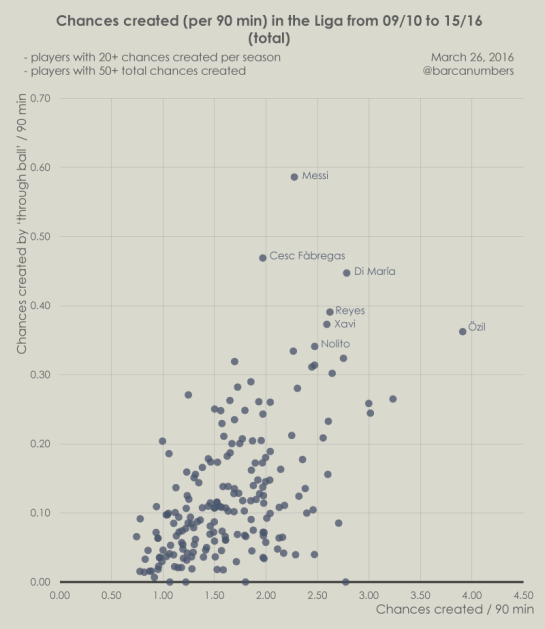 There is really not much room for argument, Messi dominates in both absolute and relative charts. These charts also give credit to many other players, especially to Francesco Totti and Andrey Arshavin, although their relative through ball numbers are not representative, since they include a relatively small number of total chances created.

Many players who feature in these charts have a high tendency to play accurate through balls for their teammates. Here we can mention Xavi, Iniesta, Robben, Aimar, Cesc Fàbregas, Özil, Reyes, Nolito, etc. Ángel Di María seems to be the player positionally closer to Messi in this aspect of the game.

One particular that scales up Messi’s playmaking ability is the fact that, unlike all the other above-mentioned players, often he is also the receiver of these passes (and arguably the best goalscorer around). So, we can expect even higher numbers from Messi if he concentrates his game more in creating chances. Maybe this is how the ‘future’ Messi might be.

Since Diego Simeone took charge of Atlético Madrid, among other features, their team is widely regarded for their strong defense. In the current season they have conceded 12 goals in 29 games, recording a very low average of goals conceded per game (0.414).

In order to give some perspective, I plotted three charts containing goals scored per game vs goals conceded per game considering the last 17 seasons of the Europe Top 5 Leagues (starting from the 1999/2000 season; 1632 data points).

Chart 1 – Goals for/game vs goals against/game in the Top 5 Leagues in the last 17 seasons. 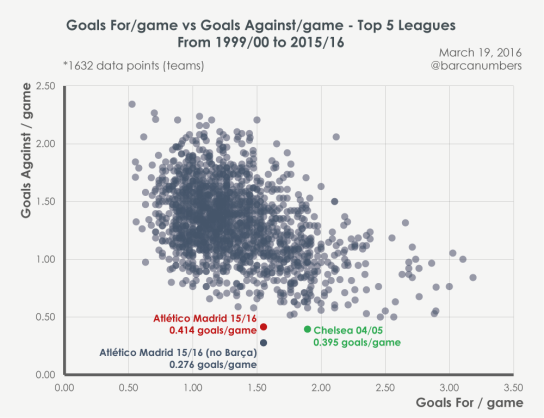 Chart 2 – Goals fro/game vs goals against/game in the Top 5 Leagues in the last 17 seasons (added Atletico Madrid of 2015/16 excluding games vs Barcelona).

It may also be interesting to see how Atlético Madrid’s goals conceded per game ratio has changed during seasons (Chart 3). The 2015/2016 ratio is very low even when compared to the the 2013/2014 season (when Atlético Madrid won the Liga and reached the Champions League Final). 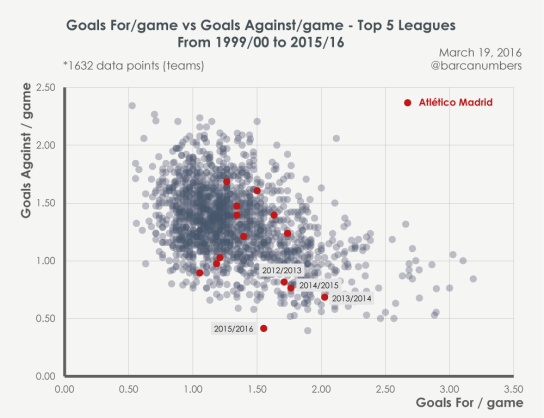 Maybe, Atlético Madrid are the best (or the second best) defensive team of the century.

Barcelona’s 2015/16 season is being characterized by a large number of missed penalties, obvious to everyone. Now, this is clearly unusual for Barcelona, since they have missed 8 penalties in the Liga for the 2015/16 season, while missing just 5 in the previous six seasons (from 2009/10 to 2014/15). What about compared to other European teams? Is such a poor performance so unusual? If we consider just the last seven seasons, we find out that there are other examples just as bad, or even worse.

Let’s consider the ongoing 2015/16 season in the European top five leagues. Chart 1 shows the plot of taken vs scored penalties by the 98 teams of these five leagues. The two lines of 100% and 50% conversion rate can help us compare the conversion rate of different teams, since the different number of taken penalties can be misleading. Barcelona are placed relatively bad here, below the 50% conversion line, but they are not the only team below this line. What makes them look ‘that bad’ is the fact they they have taken a lot of penalties (15), much more than the rest (no other team has more than 10).

Chart 2 shows the same type of graph considering the last seven seasons in the Liga (140 data points). Barcelona’s seasons are represented by the red dots. Here it is more visible that Barcelona’s penalty conversion is much worse than in the previous six seasons (all red dots are above the best fit line). As we can see, a considerable number of teams are placed in or below the 50% conversion line, showing similar performance to Barcelona’s. Obviously, the worst example here is Racing Santander, since during the 2011/12 season they managed to score just 1 out of 6 penalties.

Messi has now 22 free kick goals in official club competitions. This is a very high figure but not particularly mind blowing, considering the number of games and seasons he has played at the club. Maybe interesting and spectacular is what we find out when we classify Messi’s free kick goals according to the result of the game when they occurred (Chart 1).

As we can see in the above chart, the wast majority (19 out of 22) of Messi’s free kick goals have arrived when the team needed the most, when they were losing (3 goals) and drawing (16 goals). This data highlights once again Messi’s particularity of being relevant and influential in the most important moments of the match.

Quality of all shots taken by @leomessi in La Liga, expressed in terms of 'expected goals' value, for different game state, with data from @statsbomb. Creating good quality (high xG) chances or shot opportunities is harder when the team is losing or drawing. As minutes go by, it becomes even harder, as it can be seen from the red trend-line. On the other hand, when winning, the opposite is true.
Few finishing ability comparisons between @leomessi and Cristiano, in terms of 'goals' to 'expected goals' ratio, for the past 5 seasons. Messi is too good at this thing...although Cristiano is more efficient in headers and, of course, penalties.